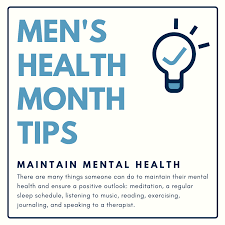 May is Men’s Mental Health Month, and the main focus of this month is eradicating the stigma associated with mental health issues. Men often see mental health struggles as a personal issue and may under-report symptoms, which can lead to serious consequences. If left untreated, mental health problems can worsen and eventually lead to substance use disorders.

Suicide is also more common in men than in women. In fact, men commit suicide at a rate three or four times the rate of women. While there are many factors that contribute to this difference, experts are increasingly acknowledging that hormone levels, social pressure, and internalized gender stereotypes can all contribute to differences in mental health.

Research has shown that men are less likely to seek help than women for mental health problems. Men tend to feel ashamed of seeking help because they don’t want to admit they’re weak. They also tend not to want to seek help from family members or go to a therapist. That makes it very difficult for those around them to realize there is a problem.

Mental illness affects all segments of society. The best situations are different for men and women. As a result, men and women must seek treatment for mental health conditions differently. In addition, the symptoms of bipolar disorder and schizophrenia differ between the sexes. The National Institute of Mental Health provides a list of specific symptoms that men and women should watch out for.

It’s important to recognize the symptoms of depression in men and to seek treatment as soon as possible. The symptoms are often subtle, and they can go undiagnosed. Suicide is the leading cause of death in men under the age of 50, and it is important to get treatment early to avoid the possibility of suicide.

While stigmas associated with mental health can make it difficult for men to seek help, there are many things that can be done to reduce that stigma and help men find the resources they need. The first step is to break down the stigmas that surround men with mental illness. Men with mental illness face specific risk factors, which makes them less likely to seek help. Another key step is to eliminate the discriminatory practices and barriers that often hinder men from seeking care.

Men with mental health struggles are often ashamed of their problems and are often embarrassed to seek help. This can cause them to feel angry and confused. Some men even develop self-hatred and don’t seek help. Because of the stigma that surrounds men’s mental health, it’s important to learn how to overcome this barrier and talk openly with a trusted friend or colleague.

Men with mental health problems often present with different symptoms than women do. They can be irritable and sad, and they may turn to drugs or alcohol as a way to cope with their emotions. The root cause of their feelings may be unknown to them. The stigma associated with men’s mental health can lead to violence and a lack of treatment.

Men are also more likely to suffer from depression than women. In fact, suicide is the leading cause of death for men under 50 years old in Northern Ireland. One-third of men have had suicidal thoughts at some point in their lives. Men are also less likely to seek help for depression, as they view it as a sign of weakness.

Men’s mental health is an important issue, and there are many ways to help. The first thing you can do is educate yourself about the signs and symptoms of mental illness. By being aware of mental illness and seeking help, you can help men deal with the issues they are facing.

Men are often shy or ashamed to discuss their problems, but it’s important to show them that you support them. If they don’t feel comfortable sharing with you, reach out to a trusted friend or peer to provide support and encouragement. While this may be difficult, it can be beneficial for both you and them. You can also seek the help of a therapist or peer counselor if you feel comfortable sharing your issues with someone who understands. Men may find it hard to discuss mental health problems in their daily lives, but it’s imperative for them to receive help if they feel like they need it.

Exercise is an excellent way to help men cope with negative emotions. Regular physical activity can reduce stress and anxiety, which can lead to depression and other mental health problems. Another great way to support men’s mental health is to donate to the Movember charity. This charity aims to reduce the male suicide rate by 25% by 2030.

Research shows that men are at higher risk of suffering from mental illnesses than women. One study found that the number of suicides among men is four times higher than that of women. Men also tend to have lower rates of access to mental health support. In fact, only 36% of psychological therapies are referred to men compared to women.

Men experience many of the same mental health problems as women, but men often downplay the symptoms. This can lead to more severe conditions. By increasing awareness, you can encourage more men to seek treatment. By making friends with men who suffer from mental illness, you’ll be doing your part in reducing the stigma associated with this issue.

Another way to support men’s mental health is to make an effort to educate your employees about their condition. Men are four times more likely to die from suicide than women. By increasing awareness, you’ll help men recognize the symptoms of these diseases and be more aware of how to deal with them.

Increasing awareness of mental health issues can be very beneficial for a company. Many businesses view their staff as their most important asset and understand that a comprehensive approach to mental health issues is needed. The first step is to create a positive mental health culture in the workplace. This may involve introducing informal ‘trouble-shooting’ sessions, enabling employees to openly discuss their issues, and providing tailored support for LGBTQ+ individuals. Additionally, it’s important to encourage your HR team to help identify any employees who are suffering from personal issues and offer them assistance.