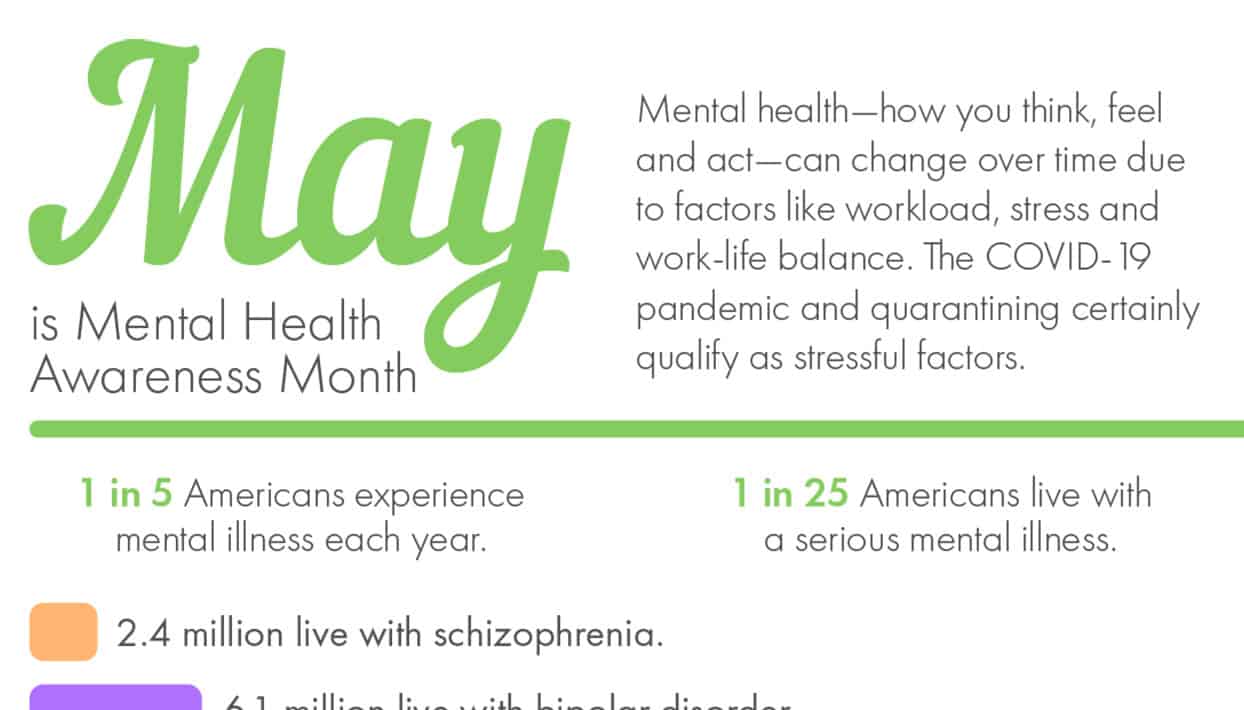 May is Mental Health Awareness Month in the United States. The month aims to promote mental health through media, community events, and film screenings. Mental health is a state of emotional and psychological well-being, which affects people of all ages, races, and ethnicities. Here are a few facts about mental health.

Mental health is a state of emotional and psychological well-being

Emotional well-being is often measured by one’s sense of happiness, whether the person experiences pleasant or unpleasant emotions, or is able to manage the stresses of everyday life. Other measures of psychological well-being include a sense of purpose and meaning in life, a sense of personal empowerment, and an optimism about the future. Social well-being includes a sense of belonging and community. Various social factors can influence a person’s mental health, including adequate housing, a stable job, access to quality education, and equity in health care.

Emotional well-being is a result of the way our mind processes information and expresses our feelings. When we are experiencing depression or anxiety, our ability to think clearly and rationally can be hampered. Inappropriate and unhelpful thoughts can lead us to respond inappropriately to different situations. By identifying your strengths and developing them, you can improve your overall mental health.

Mental health is a fundamental part of human development, and there are many strategies that can help promote, protect, and restore it. There is an enormous unmet need in the world for mental health. Social health promotion is a critical component of the new public health approach. Evidence has been gathered to prove the effectiveness of many social interventions.

Emotional health is closely related to physical health, but can differ from one another in many ways. Emotional health refers to the ability to control one’s feelings, have good personal relationships, and learn to cope with common problems that arise in everyday life.

It affects individuals of any age

Mental health is of vital importance for individuals of all ages, but older adults face particular challenges. They face significant life transitions and emotional events that can impact their health. Older adults are also at increased risk for suicide and other mental health issues. They are also vulnerable to elder abuse, including physical, emotional, and financial abuse. In some cases, the abuse is sexual or physical, but it can have psychological consequences as well.

If left untreated, mental illnesses can lead to unnecessary disability, substance abuse, homelessness, inappropriate incarceration, and even suicide. Fortunately, mental illness is treatable and many people can improve their quality of life with proper treatment. Some of the most effective treatments for serious mental illnesses have a 70-to-90 percent success rate in reducing or eliminating symptoms.

Youth who experience mental health disorders may also have trouble adjusting to the demands of their new surroundings. Their families may have a hard time understanding the challenges and coping with the problems their child is experiencing. As a result, family and social relationships may become strained. This can lead to marital discord and social isolation. Individuals with mental health problems can benefit from a healthy diet and plenty of water.

Mental health affects individuals of all ages, and it can affect people of any race, religion, or income. The good news is that these illnesses are treatable. With proper care, most people with serious mental illnesses can regain their quality of life and achieve optimum psychological resilience.

It affects individuals of any race

Mental health is a significant issue that impacts the lives of people from all races and ethnicities. Despite the widespread prevalence of mental health problems, these disorders are disproportionately burdensome for racial and ethnic minorities. They result in higher health and productivity costs for minority populations. Research has shown that mental disorders are among the top causes of disability worldwide. A study by the World Health Organization and Harvard University found that mental disorders were second only to cardiovascular disease in terms of impact on disability.

People of colour are often underdiagnosed and undertreated for mental health conditions, including post-traumatic stress disorder and depression. Many people experience racial stigma when they seek mental health treatment. However, there are a number of organisations that can provide help for victims of racism. While mental health issues are common among BIPOC, the stigma surrounding them can prevent people from seeking help.

Although mental illness is an epidemic in minority communities, the majority of treatment providers are white. In fact, 86% of psychologists in the United States are white. Moreover, only 2% of members of the American Psychological Association are black or Hispanic. This disparity is particularly significant among individuals of color, who often experience disproportionate disability burdens associated with mental disorders. Furthermore, people of color have higher rates of post-traumatic stress disorder and alcohol dependence compared to non-Hispanic whites.

Disparities in mental health care have long been attributed to systemic racism. As a result, racial differences may have a profound effect on the quality of treatment provided to people of all races. The disparity between black and white patients may be due to historical and current social conditions or to the inability of some clinicians to speak a client’s language.

It affects individuals of any ethnicity

Mental health is a common condition that affects individuals of all races and ethnicities. However, there are disparities in access to care. People of color are significantly less likely to receive mental health care than their white counterparts. In the United States, only four in 10 people with mental illness receive treatment, compared with almost half of whites.

The lack of diversity among mental health care providers and the cultural competency of practitioners is a major problem for people of color. Without access to providers of diverse backgrounds, these individuals may not receive the proper diagnosis, which may cause significant harm. Furthermore, people of color often face stigma and language barriers, which make treatment more difficult. Additionally, unmet mental health needs are likely to lead to a higher disability burden for people of color.

Minority-specific chapters follow a similar structure. These chapters review different aspects of the history of each group in the United States, as well as its present demographics, including family structure, income, education, and health status. This information is important for understanding the challenges facing contemporary ethnic groups and the need for mental health services. The authors also review the research and evidence that is available to guide treatment.

Racial discrimination and racism pose a significant threat to individuals of any race. In addition to physical discrimination, people of color are often the victims of microaggressions, which often chip away at their identity and sense of self-worth. While this isn’t the sole cause of mental illness, it is a major factor in the disparity in mental health care. For instance, Black people are more likely than white people to go to the emergency room than visit a psychiatrist.

It affects individuals of any income level

Despite the growing awareness of the mental health crisis, many people fail to seek treatment. The stigma attached to mental illness and addiction is one of the biggest barriers to treatment. The federal government is trying to reduce stigma and increase access to treatment. However, many residents of low-income neighborhoods are hesitant to enter rehab for fear of being discriminated against. Such a fear can keep many people from seeking treatment and can make it difficult to find employment.

Inequality of opportunity and poor education are two major factors that affect mental health. Public policies and income inequality can influence these factors, and can impact individuals of all income levels. Inequal education and housing can also negatively impact mental health. These factors are often referred to as social determinants.

In this study, household income was found to be associated with several types of lifetime mental illness and suicide attempts. A lower income also increased the risk of mental health problems, including depression, substance use, and anxiety. A higher income is associated with better employment opportunities, which in turn reduces the risk of poverty. However, those with lower incomes are stuck in low-paying jobs with outdated skills, perpetuating the cycle of poverty.