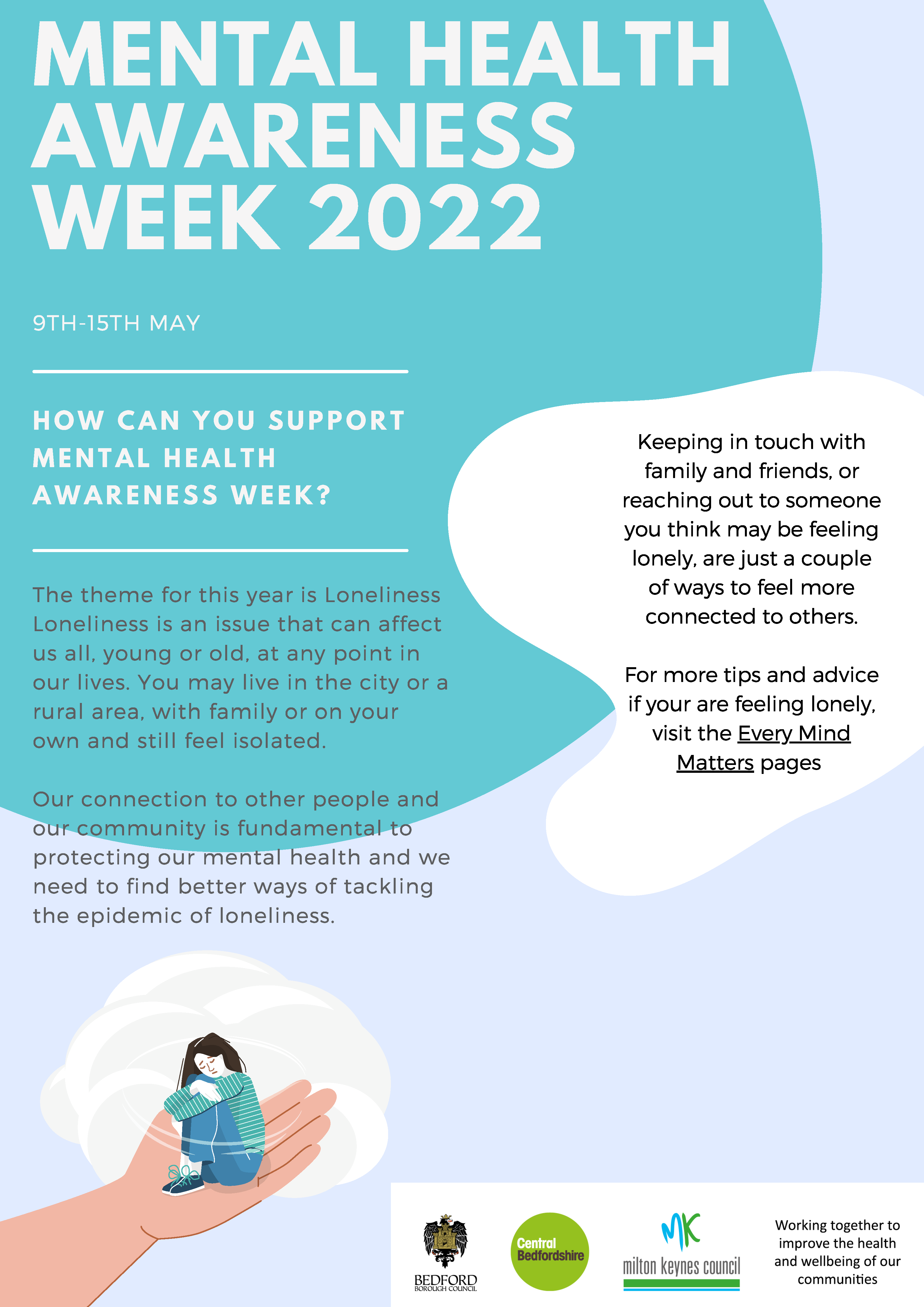 Mental health issues are a serious and pervasive problem affecting millions of Americans. These conditions affect everyone directly or indirectly. The goal of Mental Illness Awareness Week is to increase awareness about mental illness, fight discrimination, and provide support for those who suffer from it. This week is celebrated in the first week of October.

Suicide is linked to mental illness

Although mental illness increases the risk of suicide, this does not mean that a person will try it. There are protective factors that may decrease the risk of suicide, including effective mental health care, social support, and connectedness. People who attempt suicide are often in a state of overwhelming distress. This can be linked to a mental illness or to a recent event.

The most common mental illness associated with suicide is depression. Others include bipolar disorder, alcoholism, substance abuse, and schizophrenia. Patients with concurrent personality disorders have an even higher risk. People with anxiety disorders are also at increased risk. The rate of suicide is greater in people with multiple psychiatric conditions than in people without them.

Researchers found that nearly 50% of suicide victims had a mental illness within a year of their deaths. Almost all mental disorders increased the risk of suicide mortality, with bipolar disorder, depressive disorders, and schizophrenia spectrum disorder representing the highest risk. Depressive disorders were responsible for 27% of all suicide deaths.

Researchers report that the rate of suicide attempts among LGBTQ men is about three to four times higher than in those of the opposite sex. Further, the rate of suicide attempts is higher in the unemployed and in unskilled occupations than in skilled occupations. For example, a meta-analysis of 34 studies found that individuals with the lowest skill levels, those performing manual tasks, are at a higher risk of suicide.

Pandemic stress can lead to depression and anxiety. It can also cause social isolation and financial strains. The fear of infection may keep people from seeking regular health care, leaving them with more time to spend alone. Worse, a pandemic can make it difficult to get the help they need.

The pandemic is also affecting frontline healthcare workers. Several studies have linked moral distress to increased risk of developing PTSD. These findings are now being used to better understand how the pandemic affects frontline health care providers. A recent report by the Office of National Statistics highlights the growing epidemic’s impact on front-line workers.

The COVID-19 pandemic has increased the scope and depth of the mental health crisis in the United States. Nearly half of all Americans reported a mental health condition during the past year. The most common illnesses are depression and anxiety disorder. In addition, nearly 80 per cent of Americans will experience a mental health problem during their lifetime.

The pandemic has also led to heightened loneliness amongst younger people. This can lead to poor mental health and the use of negative coping mechanisms like social media. This is why it is important for young people to have access to help if they are experiencing a mental health issue. Many people may have previously ignored their problems or did not feel comfortable seeking help.

The COVID-19 pandemic has also impacted the health of college students. This disease has caused massive disruptions in their living and educational environments. It may have even affected their future earnings. Additionally, many students are suffering from depression, which may make it difficult to get back on track after a break.

The problem of race-based exclusion has a long history. Historically, black people have suffered from discrimination and a lack of access to health care. Even today, many African-Americans experience discrimination when seeking treatment. This often results in misdiagnosis and insufficient treatment. It also contributes to the lack of trust in mental health professionals.

Furthermore, people of color are more likely to experience bigotry and overt racism than other people. This type of racism can cause trauma, and this trauma can lead to serious mental illnesses. In addition to the effects of racism on mental health, African Americans report higher rates of persistent emotional distress than whites and are more likely to live in poverty.

Race-based exclusion can lead to higher levels of cortisol, which is a key stress hormone. This hormone is released when people feel excluded or criticized because of their race. This decreases self-control, and the result is that people feel more stress.

Furthermore, racial exclusion can also increase the likelihood of suicide. Although many individuals suffer from mental illness, it is often difficult for them to seek help due to the stigma attached to it. This stigma is especially difficult for people of color, as it can be a barrier to psychological recovery.

Mental illness affects about one in five adults in the U.S., and it often goes undiagnosed, especially for people who do not seek treatment. In fact, only about half of people with serious mental illness receive treatment, due in part to the stigma that surrounds mental illness. Moreover, untreated mental illness can lead to worse performance, reduced employment opportunities, and even suicide. During Mental Health Awareness Week, it’s important to learn more about the symptoms of mental illness and how to recognize them.

Mental illness is a serious illness, and it can be very difficult to talk about. Nevertheless, a simple act of kindness can make a huge difference. During Mental Health Awareness Week, many groups and organizations sponsor activities to raise awareness of mental health problems. For instance, NAMI sponsors World Mental Health Day, which is celebrated every year on October 10. In addition, there are several events that promote public education and community outreach around the topic. These include art/music events, educational sessions led by healthcare professionals, as well as speakers with lived experience. Additionally, benefit runs are held, prayer services, and candlelight vigils.

While mental illnesses are not curable, treatment is important for people suffering from them. Treatment can include therapy, medication, and lifestyle changes. There are many different types of mental illnesses, and the most common ones are depression, bipolar disorder, and anxiety disorders. Mental illnesses affect people of every race, gender, age, and background, and are often a cause of distress and poor self-esteem.

The stigma surrounding mental illness prevents many people from seeking treatment, and Mental Illness Awareness Week strives to change this stigma. It aims to educate the community about mental health and encourage equal treatment for all those with mental health conditions.

Mental health awareness week, May 13-17, is an opportunity to learn about mental health and promote resources for treatment and support. As many as 21% of Americans suffer from a mental health problem, and effective treatment options are available. Many organizations offer support, information, and crisis interventions. If you or someone you know needs help, take a mental health screening.

Identifying risk factors for depression and other mental illnesses can help you determine if treatment is needed. The National Alliance on Mental Illness sponsors Mental Health Awareness Week each year to advocate for better mental health and substance use care. This week is also National Depression Screening Day, a day dedicated to screening and treating depression.

If you’re interested in finding a counselor, check out the Substance Abuse and Mental Health Services Administration’s treatment referral helpline. The website also includes a searchable directory of mental health treatment providers. There’s also a national helpline and online directories for depression and anxiety. The National Alliance on Mental Illness (NAMI) has peer support groups for those who are struggling with mental illness.

A recent study conducted by the CDC found that nearly four out of ten adults in the U.S. reported symptoms of depression and anxiety during the pandemic. This percentage grew in older adults, those with mental illnesses, and those in the health care field. Access to treatment also became more difficult during the pandemic. In response to this increase in cases of mental illness, President Joe Biden officially recognized May as Mental Health Awareness Month.

Mental illness is a fact of life for millions of Americans. Awareness and education about mental health are vital to reducing stigma and promoting equal care for all.